One of the first things you notice about 51-year-old Quy Giao (pronounced Wee Yao) is his size. He weighs less than 100 pounds and has been a heavy smoker for 30 years. So when a spot was found on his lung during a checkup, cancer was the obvious suspect. 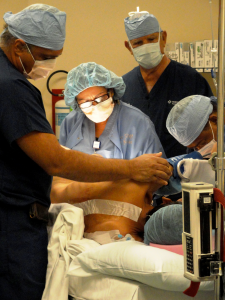 Through VIM Clinic, Giao had been successfully treated for lymphoma in his stomach, which remained in remission after a year. However, a follow-up PET scan revealed a worrisome dark spot on the upper left lobe of his lung.

Giao was referred to Dr. Sunil Gandhi, who agreed to operate, but only if Giao quit smoking.
Dr. Gandhi would need to remove tissue for a biopsy and, depending on what he found, might remove up to 40 percent of the lung.

Perhaps the second thing you notice about Giao is his intelligence. He makes a living detailing cars, but he is a voracious reader with a remarkable memory. He can discuss world history, politics, philosophy and current events.

Giao has some very devoted friends who have opened  their homes to him.

“He rented an apartment from my husband and became a dear family friend,” said Kim Stanton of Sewalls Point. They’ve known Giao for over 20 years and decided he was to convalesce at their home.

Giao lives in Hobe Sound, but the Stantons were closer to the hospital. Besides, he would need help at home after the surgery.

“It’s a pleasure to have him around,” Stanton said. “He’s very hard-working and smart. He learns everything on his own and is very industrious.”

Dr. Howard Voss, Medical Director at the VIM Clinic, needed to provide clearance for surgery, so he had Giao’s lungs and heart tested.

“His EKG was normal and a pulmonary function study showed his lungs were remarkably normal, given his smoking history,” Dr. Voss said. There were no contraindications so Giao’s surgery was scheduled for the following week, on July 6.

“He’s so light!”
That’s the first thing OR nurse Uma Singh noticed about Giao, as she helped lift him onto the operating room table.  “It’s like lifting a child.”
Giao was semi-conscious, laid out under a blanket as the OR crew at Martin Memorial efficiently went about their business getting him ready for the surgery. Dr. Carlos Maldonado was there to assist.
The surgery went well. Giao woke up in recovery and was taken to his room. Dr. Gandhi would discharge him from the hospital four days later, but he would have a diagnosis much sooner than that.